The Society for Vascular Surgery was founded on July 3, 1946, at the Fairmount Hotel in San Francisco, California, by thirty-one vascular surgeons looking to improve the field.  In August 2021, SVS kicked off a year-long celebration of its 75th Anniversary.

Videos that tell the stories of milestones in vascular surgery -- including interviews with some of the giants in the field who made those moments happen -- are now available for viewing.

Members of the SVS History Project Work Group interviewed 80 people who influenced the course of vascular surgery and who have been the specialty’s outstanding leaders and contributors. Interviews were conducted with:

Use the scrolling video player above, or visit the complete History Project playlist on YouTube.

You may also view individual interviews by clicking on a name below:

History of Vascular Surgery and SVS

Era I: Antiquity and Reparative Surgery 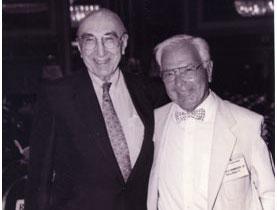 Books on the History of SVS

The following publications provide information on the history of SVS.

The following books and articles provide useful information on the history of the development of vascular surgery.