An angiogram is an X-ray procedure that can be both diagnostic and therapeutic.  It is considered the gold standard for evaluating blockages in the arterial system. An angiogram detects blockages using X-rays taken during the injection of a contrast agent (iodine dye). The procedure provides information that helps your vascular surgeon determine your best treatment options.

Angiograms are typically performed while you are sedated. The procedure may last 15-20 minutes or up to several hours, depending on how difficult the test is and how much treatment is given.

The information contained on Vascular.org is not intended, and should not be relied upon, as a substitute for medical advice or treatment. It is very important that individuals with specific medical problems or questions consult with their doctor or other health care professional.

Why It Is DoneBack to top

This procedure is performed if you have blockages in arteries that are causing symptoms.

Angioplasty can be used to open arterial blockages. Guided by X-ray, your vascular surgeon navigates through the blockage with a wire and introduces a special device equipped with an inflatable balloon. After positioning the balloon device across the blocked portion of the artery, the vascular surgeon inflates the balloon to expand the artery and compress the blockage. The balloon is then deflated and removed while keeping the wire in place across the area that has been treated. Next, contrast dye is injected to assess the result. Treatment is considered a success if blood flow is improved and less than 30% of the blockage remains. If the vessel is still considerably narrowed, placing a stent may be the next step.

Stents are used to prop open an artery at the site of a narrowing. Stents are generally placed after balloon angioplasty when there is residual narrowing or insufficient blood flow in a treated vessel. Stents are considered a permanent implant and cannot be used if you have a metal allergy. Stents that are used in the leg are constructed of a nickel-titanium alloy (Nitinol), a memory-shaped metal. This alloy has a predetermined size and shape at body temperature and expands to this size and shape after being introduced through a catheter. These stents resist kinking and are flexible so that damage from activities that involve your legs is minimized.

If surgery is felt to be a better option, your vascular surgeon will obtain any additional X-ray images needed to plan a surgical bypass of the blocked vessel/s and will then conclude the angiogram. 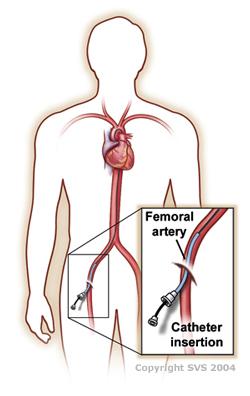 All invasive procedures can have complications. While the risk of an angiogram is low it is not zero. The most common complications are related to the arterial access site.

You will likely have bruising (ecchymosis) where the artery was entered.

Less commonly, patients experience pain and bleeding that may include blood collecting under the skin (hematoma).

In rare cases, the access artery can become blocked. Infrequently, patients experience persistent leakage of blood where the artery was entered, which can result in the formation of a pseudoaneurysm—a blood-filled sac—that may require further treatment.

Other complications related to an angiogram include:

How To PrepareBack to top
What Can I Expect After the Test?Back to top
Share on